Innovative Entrepreneur Gets a Boost 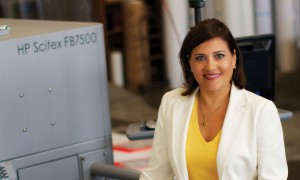 Both the substance and the scale of Carmen Rad’s business have changed dramatically over the last two decades, and USC has played a key role in that growth.

What began in 1993 as a two-person, custom-embroidery clothing business in downtown Los Angeles, has been transformed into a large-format, digital printing company with more than 30 employees. Today, Rad’s firm, CR&A Custom Inc. Banners, specializes in made-to-order advertising products. They include billboards, event booths, and displays that wrap around buildings. Her clients range from local small businesses to Fortune 500 companies.

Rad’s business venture grew out of her training in fashion marketing and design. “We’re not just a printing company, but a design company that prints. I approach projects differently because I’m used to working with patterns, seeing things from almost a 3-D perspective,” said Rad, whose husband, Masoud, is her business partner and has a manufacturing background.

Along the way, Rad has received timely and significant assistance from the federally funded Minority Business Development Agency Los Angeles (MBDALA) Business Center, operated by USC in partnership with the city of Los Angeles. She also has been helped by the USC Department of Supplier Diversity Services, which seeks to obtain goods and services from small businesses owned by minorities, women, and veterans in the communities surrounding USC’s two campuses.

“I receive a tremendous amount of mentoring and help from both the MBDLA and the Supplier Diversity department,” said Rad, who is of Puerto Rican descent and first learned about opportunities for minority businesses in Los Angeles from a flier that the department mailed her in 2004. “With MBDLA, I can reach out and say, ‘I have a new idea. What do you think?’ or ‘I want to purchase equipment. What do I need to do to put it in place in six months?'”

Since its inception in 1996, MBDLA has assisted more than 1,200 local minority businesses in securing more than $140-million in financing and procurements. In CR&A’s case, it has helped the company to obtain contracts with the city of Los Angeles and corporations like sports and entertainment giant AEG.

“[Managing Director] Linda Smith oversaw some of the documentation for my getting an SBA [Small Business Administration] loan,” Rad said. “And, if it wasn’t for Linda and [Associate Director] Dorothy Randle, I might not be in business today. When I couldn’t get my electricity for 11 months, those women fought for me by making calls and writing letters.”

The building proved to be a boon not only for Rad, but for the local economy in general; a total of 80 new jobs were created because of CR&A’s expansion and the other businesses to which she rented space in the building.

CR&A also has made its mark as a green company. Rad uses biodegradable and recyclable materials, and makes sure that the company’s equipment, lights, air, and ventilation system are environmentally friendly. In 2009, CR&A was selected by the SBA and MBDLA to receive the “Green Firm of the Year” award.

Other kudos has included being named the “2009 USC Supplier of the Year,” the “2009 Rising Star” by the National Association of Women Business Owners, and the “2007 Latina Business of the Year” by the California Hispanic Chamber.