First-year Trojan Abraham Flores finds himself in a familiar place 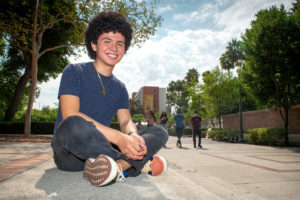 USC’s Annenberg Youth Academy for Media and Civic Engagement ignited Flores’ love of storytelling — and brought him to the University Park Campus. Now he’s here as a USC student.

Coming to USC this year as a freshman was a homecoming of sorts for Abraham Flores. Born and raised in South Los Angeles, he was a frequent visitor at the University Park Campus; now he can walk around as a USC student. 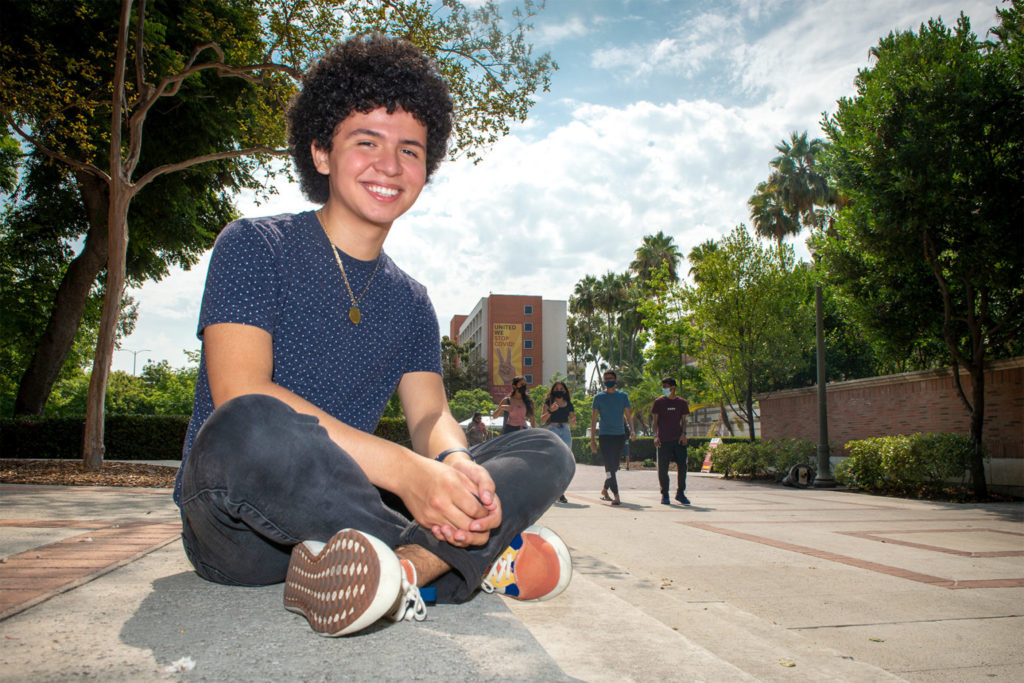 Abraham Flores was a frequent visitor to the University Park Campus while growing up; now he’s a USC student. (USC Photo/Gus Ruelas)

At a very early age, Flores was very passionate about performance arts and tapping into his creativity. At age 12, he began working with the USC Good Neighbors Campaign-funded 24th Street Theatre.

“Through 24th Street Theatre, we would come to campus,” said Flores. “We would come to USC classrooms, and we would take workshops. It expanded my world and made me see that there is so much opportunity.”

His production work with the theater rubbed off as he began contemplating how he could get into digital media production.

He’d already launched a YouTube channel to review Legos; the venture was his crash course. He worked at his parents’ bookstore to fund his venture and used his sister’s camera to film his shows. His bedroom closet was a makeshift studio; the set was built using household items such as placemats for soundproofing, window curtains for a backdrop and microwave tray to provide multiple angles. He soon learned that production takes more than a little elbow grease.

Then he saw a flyer for USC’s Annenberg Youth Academy for Media and Civic Engagement, a program that exposes high achieving high school students to education and career opportunities in media communications. The immersive program brought him to campus to take college level classes and take full advantage of state-of-the-art media center at the USC Annenberg School for Communication and Journalism.

“I went in thinking it was going to be a lot of media, but we were able to learn about journalism — the history of journalism and the press,” Flores said, crediting the program with helping him become passionate about storytelling.

“Before Annenberg, I had no interest in journalism specifically, but I was really interested in media. I didn’t make the connection of what media can mean with journalism.”

Through the program and USC Annenberg’s Center for Third Space Thinking, Flores was able to explore various ways to hone his storytelling ability. He interviewed people, wrote his first article and produced a podcast.

He wants to be the vehicle that gives a voice to those in his community who may feel they don’t have one.

Before the pandemic, he said he hadn’t wanted being Latino to define who he was.

“In high school, because I was so obsessed with helping others all the time, I had forgotten about myself and who I was,” said Flores, whose move-in experience included adjusting to the Latino floor in Pardee Tower. “Me being Latino is a very important part of who I am now. When I walk into the room, I’m not just a student, a theater actor or a journalist. I’m a Latino student, Latino actor, a Latino journalist.”

Flores suspects there are many others in his communities — in South L.A. and at USC — who may be having issues with identity. And he hopes to make an impact at USC in his community by continuing to discover who he is and helping others who may be at the same crossroads.

“I like telling stories, but I also like improving my community. How do I connect that? Through journalism,” Flores said. “There are a lot of stories in my community that still need to be told.”