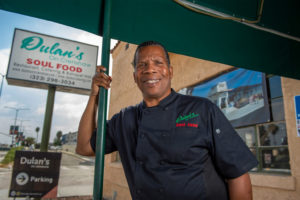 Thanks to the Bridges to Business program, Greg Dulan’s restaurants are not just surviving in a COVID-altered world; they’re thriving.

For more than 45 years, the Dulan family has owned and operated several restaurants in South Los Angeles and the South Bay. Adolf and Mary Dulan provided the foundation for the family business, opening a chain of hamburger stands in the Crenshaw neighborhood of South L.A.

Their son, Greg Dulan, came on board after graduating from Howard University and pursuing a brief stint in corporate banking. He became very familiar with the peaks and valleys of small business ownership.

There were highs: Hamburger City grew from one location to five, including one in Marina Del Rey.

Then valleys followed. The family shuttered all of their South L.A. locations due to a combination of high crime, poor finances and the difficulties minority-owned businesses face in attaining funding. The Dulans’ family business was in trouble.

In a last-ditch effort, Adolf Dulan shifted from “hamburgers and fries to collard greens, fried chicken and peach cobbler overnight,” Greg Dulan said. The restaurant was renamed Aunt Kizzie’s Back Porch, and it “took off like a rocket.” 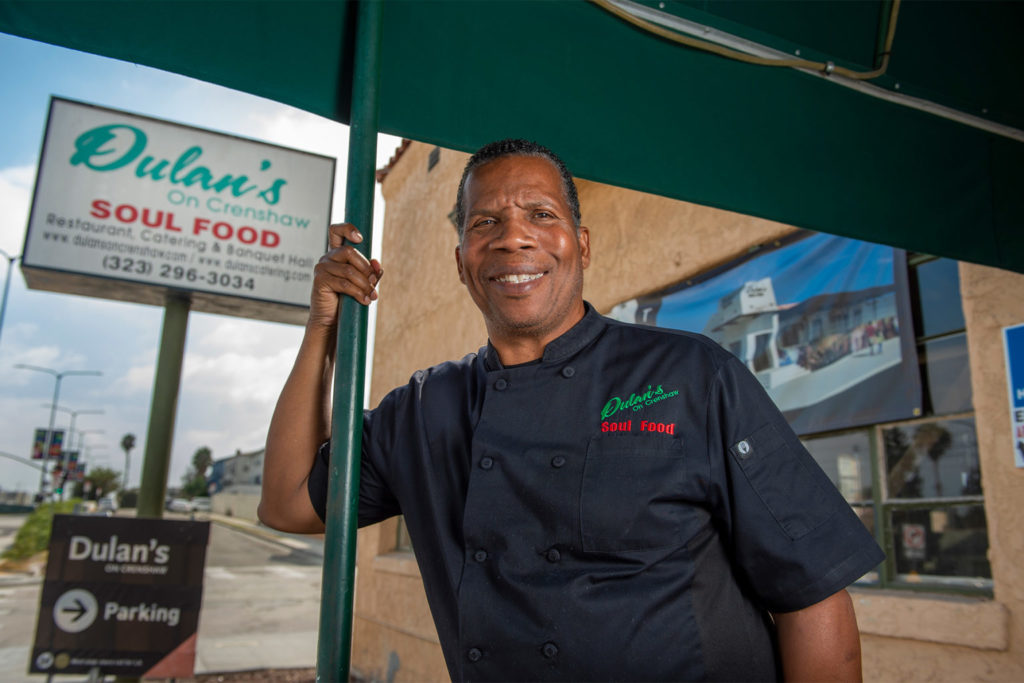 Greg Dulan continues to use the skills he learned in USC’s Bridges to Business program. (USC Photo/Gus Ruelas)

“It was the first time you could get soul food on the Westside,” he added. The success of the restaurant led to the opening of Dulan’s on Crenshaw and Dulan’s Soul Food Kitchen in Inglewood.

The mandated safer-at-home orders and COVID-19 closures, however, presented a new set of challenges for Greg Dulan and his businesses, with a new low looming. For the second-generation restaurateur — now the sole owner and operator of the family business — he had to find ways to survive.

He was clearing out his inbox when he stumbled upon an email from USC’s Bridges to Business Program.

“At the time, we were in the middle of COVID and a lot of the businesses in the program were struggling — myself included,” Dulan said. He joined the program looking for guidance and to create a new direction for Dulan’s on Crenshaw to follow once the COVID situation subsided.

“The program came along at the right time,” Dulan said. “I began applying the tools before the program even finished. The creation of a new strategy, using the Bridges to Business approach, is taking my business to the next level.”

With the insight and knowledge he gained through the program, Dulan navigated his business through uncharted territory. He created his strategic growth plan to not only help the family business survive but grow during the pandemic. He focused on catering opportunities; his restaurant was selected to participate in the city of Los Angeles Senior Meal Emergency Response program. Dulan’s was one of 40 restaurants in the program that delivered over 4 million meals to seniors and people in need. His restaurant also provided catering for the construction staff at SoFi Stadium in Inglewood. These two endeavors helped his business survive and provided capital to plan for the future.

“The neighborhood is going through rapid change,” he said. The $1 billion Crenshaw/LAX Transit Project is altering the dynamics of the neighborhood, making it more pedestrian-friendly, as is the addition of more than 2,000 housing units within a two-mile radius of Dulan’s on Crenshaw. The restaurant is undergoing a major renovation to increase capacity and efficiency to handle the new business that’s coming to the community.

Dulan’s entrepreneurial spirit has kicked into high gear, opening doors to new business ventures. He partnered with Kim Prince to open Hotville Chicken at the Baldwin Hills Crenshaw Plaza and launched a food truck called Dulanville, a dual-branded venture that has allowed him to downsize his carbon footprint while enabling him to serve his cuisine throughout the city.

He is also a participant in USC’s Trojan Shop Local, a program that supports local and diverse small businesses around USC.

“This is taking it to another level. It’s more formalized,” Dulan said, adding that he will be building two ghost kitchens within a half-mile radius of the University Park Campus to optimize delivery to the USC community. “This is going to be very beneficial for both Dulan’s Soul Food and Hotville Chicken.”

Dulan, who still uses the strategic growth plan he created during his time in the Bridges to Business program to source funding for his ventures, hopes to make a positive impact in the community.